Cruise and Play in Costa Rica and Panama 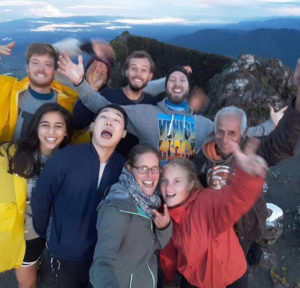 “I never knew I could have the time of my life, snorkel in the clearest blue waters and learn Spanish at the same time”. These are the words of just one of the students in the Travelling Spanish Class offered by Spanish at Locations.

Over a four-week period, you can hike to the highest peak in Panama, marvel at one of the greatest feats in modern engineering (the Panama Canal), island-hop in an archipelago of 365 stunning islets and get acquainted with the only country in the world without an army, Costa Rica: all this while simultaneously learning Spanish with a curriculum tailored specifically to your needs.
Whether your Spanish ability stops at being able to say ‘hola’ or you’ve been dipping your feet and practicing for a while, there’s a level to suit you in our Travelling Classroom, which sees you spending a week each in Panama City (with a weekend jaunt to the San Blas islands), Boquete, Bocas Del Toro and Turrialba in Costa Rica. Our program was designed for people seeking enriching travel experiences while improving their language skills at the same time, without having to stop and start from scratch with different teachers at each school.

Zapatillas Island for a weekend trip

The continuity and flexibility of the program is what attracted Danish 22-year-old Emily to the Travelling Class. Speaking to her travel agent back home in Denmark, she expressed a desire to learn Spanish as she travelled but didn’t want the tediousness of repeatedly re-acquainting with a new teacher that wouldn’t know her level or capabilities. She wasn’t aware that a travelling class existed, and certainly not one which would expose her to beach, adventure, culture and the splendour of Central America. “I started at level A2 and very soon was moved up to B1 after my teacher saw how easy I found the course material. Everything is possible and the program is so flexible, you really get to choose your schedule. I actually opted to stay in Bocas Del Toro for one more week instead of going to Turrialba because I just loved it so much. I really felt at home as soon as I arrived and am yet to leave long after the program has ended”.

For Emily, learning Spanish had always been a passion of hers with massive appeal. “There is just so much richness within the Spanish language; from the music to the films. The people and the culture as a whole are so stunning. It’s spoken in so many places as well, so its usefulness is unquestionable”. Through the program, she has managed to realise this dream and now also has the skills to actually live in a new place that she now calls home. “I would recommend the travelling class to absolutely everyone, because it has everything”, she adds.

Susan and Dwight, a couple who describe themselves as ‘seniors from the U.S.’ also highlight the flexibility and broad depth of the course. “It doesn’t matter how old you are, or how good you are, the teachers monitor you and are happy to do more of what works, and less of what doesn’t”. On the brink of retirement, they were toying with the idea of going to live in Latin America but knew that Spanish skills would come in handy in order to do so. While holidaying in the Osa Penninsula of Costa Rica, they wanted to carry on travelling while taking classes and couldn’t believe their luck when they found the Travelling Classroom online. “We’ve been to so many nice places now and really loved that we could choose between hotels, the hostels owned by the Spanish school or at a home stay for a more authentic local experience as we did in Bocas Del Toro. Turrialba was also great for us and we really want to go back there. Going to different countries with the Travelling Classroom, we also got to learn about the intricacies of Spanish and the different words used in each of the countries- and there are many,” adds Susan.

Very few companies combine so many locations into one Spanish program. This is what attracted Greenlander 30-year-old Niels to the Travelling Class. While on holiday in Curacao, he came across the course online and immediately got a flight to Panama City’s Tocumen Airport where he was picked up by the school. Arriving at 2AM, he vividly remembers being captivated by the twinkling lights all over the City. He arrived on a weekend when no classes take place, so his time was free to be spent leisurely spotting boats at the Panama Canal, enjoying ceviche at the fish market in the old town of Casco Viejo, briskly hiking up Cerro Ancon and dancing the night away at famed rooftop bar, Tantalo. Bocas Del Toro was another highlight of his trip as a self-confessed ‘ocean addict’.

Both Tatiana, a Spanish teacher from Costa Rica and Ingrid who originally hails from The Netherlands, taught Niels. “I loved getting lessons from a local but I also really appreciated being taught by somebody who wasn’t a native Spanish speaker as she would definitely know the common mistakes one might make when learning Spanish for the first time. I really got the best of both worlds in terms of the teachers and the locations: we had city, we had amazing beaches, nature and wildlife and we had mountains. We had beautiful night rain in San Blas and wonderful sunsets in Bocas. My teachers were also happy to switch my schedule when there was something I really wanted to. I hiked up to Volcan Baru in Boquete to catch the sunrise, so my teacher moved my morning classes to the afternoon without any problems. This has truly ended up being one of the most unique and exhilarating experiences of my life”.

See you in paradise!

See all photos  ›
Manage Cookie Consent
To provide the best experiences, we use technologies like cookies to store and/or access device information. Consenting to these technologies will allow us to process data such as browsing behavior or unique IDs on this site. Not consenting or withdrawing consent, may adversely affect certain features and functions.
Manage options Manage services Manage vendors Read more about these purposes
View preferences
{title} {title} {title}